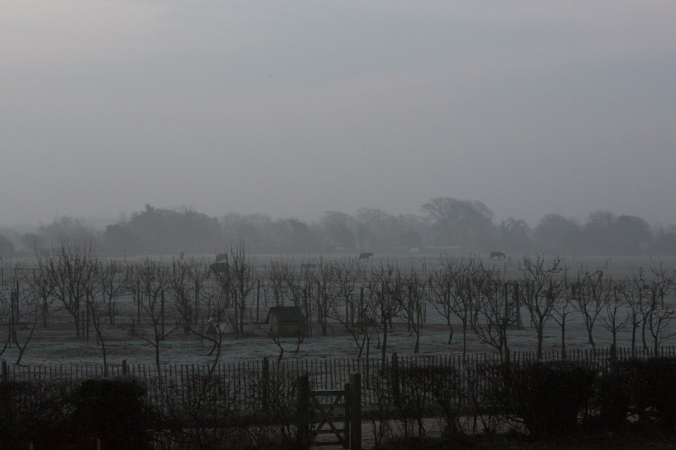 I just spent a week on a very nice farm near The New Forest. I didn’t see much of my local surrounds. I was cooking like a dervish. My feet beat a path from the kitchen door, to the poly tunnels and then the chicken coop. Sometimes the other way round. Round and round. Over and over. You can make a groove in a week. I missed it when I got home.

I was there to feed a small group who’d come from various countries to learn some stuff from  Nic Askew . About… well, about being human. Exquisitely so.

The edgy thing about this kind of gig, is being required to make such a radical gear change. I need to call my mind, body, heart and soul, into fierce, fast engagement and productivity. It’s not my natural gait. I took a trick from the wonderful writers of The West Wing. What’s next? says Mr. President, repeatedly, like a staccato drum beat throughout seven seasons of top notch television. What’s next? A call to focus and action. Actually, I’ve been incorporating it into the beat of my own life. The slow and heavy beat in which I stumble and bumble along. This particular week though, I employed it more in the spirit it was written. I, what’s nexted myself from seven-thiry in the morning until ten at night. It was relentless. And, it was great to be on a mini-break from my more accustomed terrain of relentless. The thing about having to do a lot, do it fast and do it well, is that there’s only that.

You might say, well do it more and live in heavyweight less. But I can only do it in-between the lines of heavy. I can only do Carolina’s Kitchen if I give myself up to my deep, animal nature, enough. And enough for me is a lot. I need to crawl, sigh, groan, moan and walk slowly with Leonard The Dog.

The more I practice giving myself up to myself, the more I know and trust I can do the other thing too. That I can show up and slip, slide off shank’s pony, into the racing car. Not that I can drive, but you get my drift.

So, thank you life for showing me who I am and can be. Thank you for the gigs, for the sheer, brilliant pleasure of it and so I can pay the bills. Thank you for this week down on the farm, for the precious people, new threads of connection, chickens, dogs and the horse that kissed my hand.

3 thoughts on “Down On The Farm”