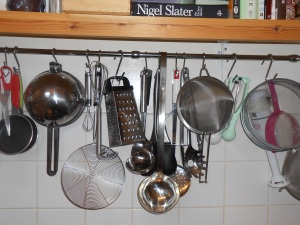 Here’s the thing. Even though I am a little bit famous for being relentlessly compassionate in the face of relentless depression, I do employ brutality on occasion. Today was such an occasion. Quite late in the day, almost too late in the day, I had to get behind myself and push and shove. I can’t always do this. Mostly I can’t. It puzzles me greatly that sometimes I can. If I’m being a bit of a beast to myself, I chew away at the notion I could do it more but don’t because I’m weak. Or a failure. Or it’s all deeply, pointless. I work hard not to encourage these ideas. I don’t give them any cake or peanut butter KitKats. Those old stories have well and truly had their day. They had a long, old tenancy in Caroland until I managed to evict them. Sometimes they come back around, whining and kicking at the door.

This push, when it is possible, has to be brutal or it doesn’t work. I put my hands down flat on my shoulder blades, my knee in my own back. Put all my weight behind it. I have to push like I mean it. I have to push hard enough to go over a cliff or under a train. Off a window ledge even. Depression shrinks and shifts perspective and distance. I live in a one bedroom flat. There isn’t really much ground to cover. And yet the journey from bed world to the kitchen can seem impossible. It’s a journey from embodied immobility, to movement. There’s hell of a chasm between the two. Hence the violence. I like to think of it as compassionate brutality or an extreme measure that is sometime called for. I had to move. I was desperate to find motion. Quite, quite desperate and this is the only way I have to get there.

I threw myself across that wide divide and into the familiar, life-giving motions of baking and making. My kitchen received me as it always does. I drop right into the groove, the rhythms, the baking beat. I used to worry that because I came with such a heavy heart, my cakes would taste of depression. Something else happens though. The depression in my body becomes the taste of aliveness in the food. Through movement, what is, becomes tasty. That showing up thing always works, even if I have to commit an act of violence on myself. I guess that’s why it’s not an everyday thing. The violence of it is very real. I’m not being metaphorical here. So, I couldn’t do it too often or I’d be back in the old story.

Today, quite late in the day, I have made Lemon & Thyme Cake, Black Treacle Fudge and Plum & Blackcurrant Loaves. My home smells sweet. Though I am still depressed, I am alive in it. There is very definitely, depressed and depressed – two different countries.

6 thoughts on “An Extreme Measure”