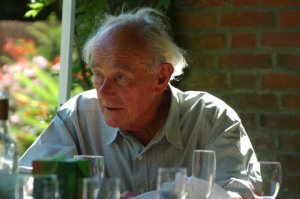 My father died last month. Shortly afterwards I went to his funeral.

I hadn’t seen him for some years. A time came and I drew a line. Officially I gave up on going through the motions. I’ve never been any good at that. I could tell you a long story about all the ways a father and a daughter never found a way to meet. Or I could just show you a tiny snapshot. When I ran away from home at fourteen, his response was to tell my brother, that he’d probably never see me again. He did see me again, but I don’t think he ever really saw me. And I longed so hard, for a father that would come and find me.

The funeral was odd. I wasn’t feeling very much. I almost didn’t know who the man was… maybe, it’s just too hard to feel the loss of a father who has always been so far away. I’m glad I went. My very dear brother gave me an out, but it was never in question that I wouldn’t show up. I missed my mother’s funeral due to my pursuit of self destruction on the other side of the world. I didn’t even know she had died until much later. So, I went for my father, and my mother, and I went to stand beside my brother. I went to honour the family I am part of, even though I never knew what feeling part of something was, until a less biological kind of family showed me.

I was anxious about going. Mostly about the possibility that my stepmother would lash out at me. She has a well deserved reputation for saying terrible things and has said a few to me. I imagined the very worst she could say and practiced my reply. I got it down fine and actually, while she was being an arse to some, I got nothing but charm. It was a weird gift to be able to say goodbye to the woman who has walked beside my father for forty years.

I saw cousins I know of but don’t know, and my stepbrother, Giles, who I hadn’t seen for nearly four decades. Reminiscing our tiny, long, gone shared history, he said, “I remember you always listening to Leonard Cohen”.

5 thoughts on “A Funeral”